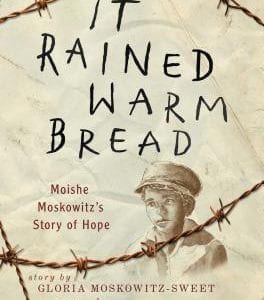 IT RAINED WARM BREAD: Moishe Moskowitz’s Story of Hope (A Novel in Verse)

Holocaust survivor Michael (Moishe) Moskowitz was a Jewish child in 1936 when Hitler’s Nazi rise to power turned his homeland, Poland, into a very dangerous place. In short but soul-stirring, first -person poems, his experiences are revealed in stages/chapters. The 1936 collection recounts bullying and physical attacks, Crystal Night, family life, and bartering his school smarts for the protection of two burly peers allows him to make his way back and forth from home to school without being attacked. The next section, 1939, includes his family’s failed attempt to escape and hide, their regret about not escaping earlier, and the accelerating presence of soldiers, tanks, dogs, and barbed wire fences. Bullies have become beasts, and one last attempted-escape by his father is too late- the borders have closed. Chapter 4, the Kielce Ghetto, escalates the horror of his life in an enforced Ghetto, an isolation-rationing-starvation-execution enclosure within the city itself. Play, friendship, cunning, and his school-smarts buttress his battered spirit and provide bartering material to enhance his chances for survival, but just barely. By August, 1942, the section is named LIQUIDATION and the first of several evacuations to death camps results in Moishe losing his mother and being separated from his father.

Finally, From Camp to Camp finds Moishe hanging on to hope, struggling for life, and relying on luck and hope to sustain himself and his friend. He values the example of  the few adult men with enough strength to encourage and occasionally help him survive. One poem shares its title with the book, IT RAINED WARM BREAD. During one of many open-cattle-car transports between camps, near the end of the war, Czechoslovakian women defy the guards to raid a bakery and hurl warm loaves of bread over the tops of the cattle car to the starving, freezing prisoners. Moishe retains the scent of their courage longer than the aroma of fresh bread. The conclusion describes his final death march, one that did not end Moishe’s life. Read for yourself to learn about how he survived and then dedicated his life to the survival of their stories. This book is his daughter’s effort to keep that story alive after her father can no longer do so.

For a few years I’ve been studying and preparing to be a Holocaust Educator in the Milwaukee area. Through this structured program I’ve gained so much in knowledge, nuance, and appreciation for the overwhelming task involved in transmitting to a new generation the immeasurable horror and impact of the Holocaust. I had spent a lifetime reading fiction and nonfiction on this topic, actively researching scholarly and personal accounts, digesting and processing a reality that is mind-numbingly horrific and yet undeniably true.

The task is overwhelming, and yet a worthy challenge. I’m neither Jewish nor a survivor, and yet I am invested deeply. Why? Because I am human, and this was a HUMAN atrocity. It is the humanity of the Holocaust that makes the genre of novels so effective and powerful as a tool of education, especially for the young. First person accounts are important beyond measure, but a novelized story, one that is well-researched and prescreened by sensitivity specialists, can reach a place in readers’ hearts and minds that might otherwise be closed off to direct instruction and/or academic materials.

I loved this novel-in-verse approach to recounting a portion of the life of Michael Moskowitz, a very young Polish Holocaust survivor. IT RAINED WARM BEAD: Moishe Moskowitz’s Story of Hope is the story in free verse poems that was lovingly shared by his daughter, Gloria Moskowitz-Sweet to the Poet/Author, Hope Anita Smith. Illustrator Lea Lyon has enhanced this story with its own power by skillfully inserting sepia-toned line sketches throughout the story in exactly the right moments. 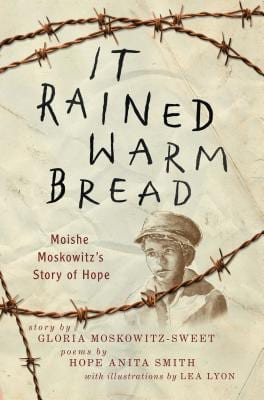 This novel in verse offers a poetic revelation of one man’s memories of the years he spent in ghettos and camps throughout the war years in Europe. It’s an up-close view of the physical and emotional price paid for being Jewish in the midst of the unprecedented Nazi genocide.
The format and scenes introduce a tragic and overwhelming slice of history to somewhat younger audiences, and these days it feels necessary to begin that exposure sooner rather than later.

A book like this is an ideal way to introduce younger readers to a personal story from the Holocaust. It is only one of millions, (MILLIONS! ) of individual stories. Each person experienced a different story of survival, of suffering, or of death. Even so, one detailed story, well told, can be a more effective way to grasp and connect with that ONE personal story than to generalize and imagine, wrongly, that all of those individual experiences were the same.

Sometimes, one story is enough.