I featured two titles on my picture book blog: first, a recently-released nonfiction picture book, and  another from five years back, both starring a well-recognized canine hero from the First World War. Both profiled Stubby, a stray dog who adopted a a training unit of soldiers and joined them throughout their war experiences.

When I speak to groups, in schools or other gatherings, I often mention that I NEVER intended to write a book with a dog in it. Everyone knows that if a dog is in the story, bad things can happen, to varying degrees.

And yet, once I finally found Mari’s character and voice in my research, she virtually took over the keyboard and insisted that the story was hers. Decades of research and memories of personal stories of resistance from my Norway visits shifted into her focus and, through her eyes, the story poured onto the page.

In fact, at many points we argued. Before we could even begin she insisted on having a dog. She won that argument, and the first book is named for her dog, Odin. Mari’s need for a trusted companion, for a reliable source of love and security and companionship through times of danger and confusion, left me no choice. If you’ve even read the summary of the first book, you know that Mari won that argument, and later ones requiring hard choices involving Odin.

So it feels important to share two versions of Stubby’s stories here, and end with a powerful link regarding memorial sites for military service dogs. Here’s what I posted: 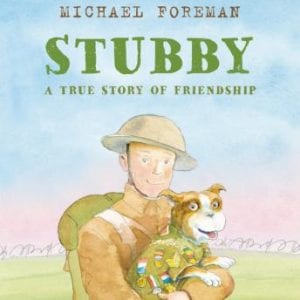 SERGEANT STUBBY is an actual dog who became a mascot and hero during World War I. For many years Stubby’s story faded from history, or remained among adult military historians. Now, in several wonderful ways, Stubby’s story has been shared in kid-friendly picture books. The most recent is STUBBY: A TRUE STORY OF FRIENDSHIP, written and illustrated by Michael Foreman. (Anderson Press)

This is nonfiction with helpful backmatter, including a photo of the actual STUBBY and historic details not told in the body of the text.
Both the imagined casual first-person narration (a suggested version of Corporal Robert Conroy’s voice) and the events portrayed in softened/lightened illustrations allow young readers to focus on Stubby’s energetic and supportive personality rather than on more severe elements of war training and actual war.
Stubby becomes a mascot for Conroy and his company, exceeds every hope or expectation, and even shakes paws with President Wilson. Back matter added small rich details, such as that last one, while freeing the story itself to develop the deep relationship between Stubby and Conroy (and the rest of his team).
The final page makes clear that post-war home life is a big improvement, but also leaves veterans (human and dog) seeking time to find their new place in an old-but-changed world. The end papers are brilliant, as the opening papers carry bootprints into the pages of war, but the final papers include paw prints with the bootprints, heading out of the book and into the future, together. 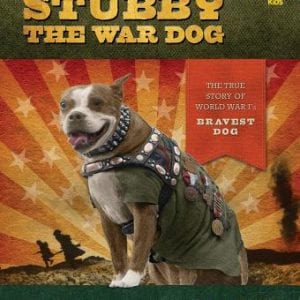 Stubby and Conroy will certainly raise curious questions from even the youngest audiences. For more detailed (and extensively well-researched) information about Stubby, pick up a previously published nonfiction book for slightly older readers. STUBBY the WAR DOG is written by award-winning author Ann Bausum and is densely illustrated with archival photographs, maps, etc. that enhance the life and facts surrounding Stubby.
The details of Stubby the War Dog (the much-decorated Sergeant Stubby) have made their way into a variety of books for young readers. In this case, the reliable Ann Bausum brings her award-winning research and writing skills to a youth-friendly, photo-rich version of the adult book she wrote on this topic. Using an appealing storytelling tone, Bausum finds both the heart and the power of this war-dog story. Dense with useful (and fascinating) back matter and sources, this is a great choice as anchor reading for middle graders, supplemented by the growing number of simpler picture book approaches to this true story. 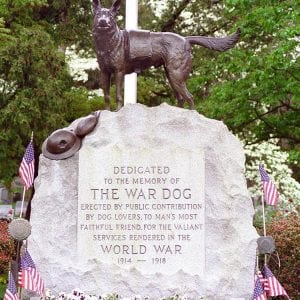 Depending on where you live or plan to  travel, you might want to save this link to a post, which features active links and other information about some of the many global monuments to war service dogs. Click to take a virtual tour right away, if travel isn’t on your agenda. Then add a stop at the library or bookstore on your next list for errands and pick up these two books. In them you’ll find amazing stories about this remarkable dog.

As Mari insisted, even when the the prospect of including a dog in a dangerous story fills you with dread, the benefits outweigh the costs. In other words, love and loyalty trump fear.