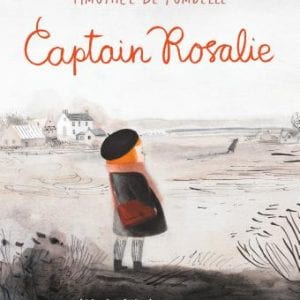 This slim and gentle book will surprise you. CAPTAIN ROSALIE could easily slip under the radar, but I urge you to take time to find it and read it. The effort won’t be great, not in the search or in the reading. The impact, though, will be enormous. In fact this sixty-page picture book/novella hybrid is an ideal read-aloud for those very reasons.

Within a few pages, CAPTAIN ROSALIE will burrow into the hearts of readers/listeners. Its simple but deep text combines with occasional but emotionally powerful  images using limited colors and  sketchy lines. Together they bring to life a heartfelt view of perhaps the most horrific war of all time. That war was too often overlooked by young and old today. The first “world war”, the one that most said would “END ALL WARS”, unleashed a blend of conventional, innovative, and atrocious weapons that revealed the pointlessness of centuries of strategy and the inhumanity of chemical and other technical weapons.

The magic behind making those long ago times and events matter lies in the voice of Rosalie, whose first person narrative leads us into her heart and exposes the broken hearts of war. This is written as if in a journal, by a spy “disguised as a five-and-a-half-year-old girl”. This little redheaded waif occupies an empty desk at the back of a classroom of older students, hiding among the coats while her mother works at a factory after her father “went off to fight”.

As she honestly reports in the  first line, “I have a secret.” She pretends to draw while observing, learning, and revealing her inner observations and worries to us, the readers, in hints and hopes, gradually trusting us to share her mission. We soon meet her gentle veteran teacher who lost an arm in battle. We realize that only one older student, Edgar, even seems to know she is there. She does some chores, accepts Edgar’s occasionally gentle attention, and eagerly greets her mother when she finally arrives at the school to pick her up each day- long after everyone else has left.

This opening quickly established a pattern for Rosalie and her mother and her spying days. Unable to read, Rosalie welcomes letters from her father which her mother reads aloud- presenting loving, reassuring, and confident words that are meant to calm and support Rosalie. Even so, she resents not being able to read them for herself, to access a direct link to her father. His style of simple drawings on each letter feels familiar, even though they show trenches and forests and barren fields. But Rosalie’s spy instincts are alerted when her mother continues reading on and on even though each is only a one-page letter.

Within only a few pages of this book there is a knock at the door and other news is delivered. In the remainder of the book, Rosalie executes a plan to sneak home and read those letters for herself. She doesn’t read fluently, but she has used her spying time well, learning how the alphabet works. When Edgar follows her home one day he becomes a trusted ally, offering support but respecting her orders.

Rosalie soon learns that her father’s letters reveal a horror that is nothing  like the idyllic descriptions in her mother’s words. She finds and reads (partially) all of his past letters but not the ONE letter that caused her mother to gasp, to change, to confuse Rosalie. The one that made her mother no longer feel like the mother she knew and loved.

A high-tension conclusion unfolds quickly, one that is both heartbreaking and satisfying. Rosalie’s need “to know” and her mother’s willingness to share her grief are by no means rare, but are also distinctly specific to these two, to this small and vulnerable family.

Trauma seems to surround more children than it spares, these days more than ever. The quiet “spies”among us know (and ache) so much more than we can begin to imagine. The events in this story are anchored in history from more than a hundred years ago. Even so, the tragedy of loss and grief in these individual lives is universal and will resonate with the specific and personal losses, worries, and pain in the lives of young people today.

The language and storytelling in this seemingly simple little book will appeal even to readers who live protected and privileged lives. Despite that, those “safe” young lives are being lived with an awareness of the fears of this little spy- noticing and knowing far more than we can even imagine. I hope you will search for, read, and share this book. 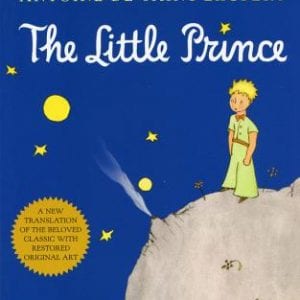 On a side note, how long has it been since you read THE LITTLE PRINCE by Antoine de Saint-Exupery? All the while I was reading Captain Rosalie, and after, I was reminded of this short classic. I’d be willing to bet that this iconic little book has been read by anyone reading these words, and that it left you with a residual emotional tug. I’m sure I read it several times when young, but it has been so many decades that I checked it out of the library and read it again. CAPTAIN ROSALIE called THE LITTLE PRINCE to mind, but after rereading I struggled to put a word (or more) to why they felt so related. I’m sure that the determination, resilience, anxiety, and intentions of both Rosalie and the Little Prince triggered that link, but I’m still working out the many other ways that they seem to share space in my heart and mind. If you happen to read both, I’d love to know how you respond to my reaction to this for paired reading.
Please stop by and comment, if you have an interest. And whether that invitation appeals to you or not, please accept my advice to read CAPTAIN ROSALIE.