Soon after ODIN’S PROMISE released, readers offered the kindest gift of all- a continuing interest in Mari and her family as the occupation of Norway continued. I had never intended to write a sequel, but I swallowed hard and dug into research, then writing. As I wrote about the ensuing four-plus years of war and occupation, I realized I needed to write those developments in two volumes.

The segment shared today was from my original attempt at a single volume. I share it in the sprit of the holidays, with a follow-up comment afterwards. I hope you’ll enjoy it.

In this early plot line Mari traveled alone to Oslo instead of to Bergen, as she did in MARI’S HOPE. She stayed with her sister Lise for medical training during a period when schools were closed in 1942. This passage takes place as she is preparing to return to Ytre Arna. 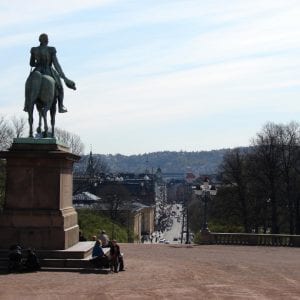 During a quick breakfast Mari convinced Lise to send the remaining garments home unfinished. Enough of the secondhand clothing would fit for spring and she intended to master the sewing machine when she returned to save Mama and Bestemor the trouble the othersof making alterations.

She craved more time with her sister, so they spent much of the day on a final tour of Oslo, ending up at the park. The surprising shift in weather brought little wind that day and the sun penetrated layers of wool clothing.

Mari loosened the scarf around her head and dropped it to her shoulders. “The best weather of the winter arrived just in time to see me off.”

Lise tilted her face to the sun’s warmth and breathed deeply. “It’s always colder here than on the coast, but this winter has been brutal.” She wrapped an arm around her sister’s waist and leaned her head on Mari’s shoulder. “Just remember that the worst winter is always followed by spring, even when you can’t feel it coming. It’s inevitable, and we must not give up hope.”

They sat silently for several minutes. Mari clung to Lise, wishing she could stay. She had come to rely on her sister’s advice, her medical training, and the solace of uninterrupted hours to escape into academics.

On the other hand it felt more like a year than a month since she’d seen Bestemor, Mama, and Papa. Despite the elaborate network of underground messages, very little could be learned about individuals and families. Her dread at the thought of returning to school was the opposite of her feelings before the invasion. Now she feared pressure to join the girls’ youth group. The resistance newspapers reported that Quisling was ignoring the refusals of parents across the country and had dropped his demands, but Mari was feeling desperate to hear that from Mama and Papa.

The sound of boots approaching interrupted her thoughts.

A German officer stood before them, blocking the sun, and addressed Lise. Mari squinted up at him and then dropped her eyes without speaking.

“Hilsen, Doctor Braun. My sister returns home tonight so I arranged my schedule to be free today.” Lise stood to speak to him, but barely reached his shoulder so she was staring up into the sun.

“Wunderbar! I have a free afternoon as well. May I treat you both to a farewell dinner?” He offered his arm to Lise and extended his hand to Mari.

Mari struggled to hold still, fighting the impulse to bolt. She didn’t dare lift her eyes. Even a glimpse of his uniform might trigger an attempt to escape.

“Nie, takk, Doctor Braun. I’m afraid we’ve wasted most of the day enjoying the weather and have very little time to finish packing.” Lise bent over to collect her bag and tugged at Mari’s elbow.  Mari’s impulse to run was suddenly replaced by a desperate need to remain frozen on the bench, as immovable as one of the many sculptures in the park.

“Surely you have enough time for a bit of sweets? Come along to the hotel dining room and I’ll have them pack a little box of treats for your journey.” Mari felt his hand on her elbow and clamped her jaw tight to prevent herself from shouting NEI.

Lise squeezed her other arm and urged Mari to her feet. “It’s a very kind offer, Herr Doctor, and it is on our way home. If you insist, we’ll stop with you for just a few minutes.”

The shock of Lise’s words left Mari half stumbling along, her sister’s arm linked through hers and the doctor’s hand holding the other. Her mind raced, searching for possible reasons why Lise would agree. It wasn’t until they reached the end of the block and stepped through the lobby entrance that she realized they were now two Norwegian girls walking through Oslo at the side of  a German officer. It was all she could do not to wretch on the royal blue carpet.

She felt herself being guided to a small glass table where the officer pulled out two chairs. “I’ll only be a moment, I promise.” By the time she dared to look up he was out of sight.

Mari leaned toward Lise to demand an explanation but her sister squeezed her hand, smiled brightly, and whispered, “Not now. At home.” Lise sat back in her chair and seemed to be examining every inch of the hotel.

Mari concentrated on breathing normally and glanced around. She felt like an injured elk surrounded by a pack of timber wolves. Soldiers and officers hustled in and out of the elevators, seldom pausing for conversations. To her relief, none seemed to even notice them.

Sooner than she expected, the doctor returned. He placed a small bakery box on the table. “It’s only some sandwiches and sweets, but you said you were in a hurry. I hope you’ll have a safe and easy journey home, young one.”

Her sister stood and Mari quickly did the same. Lise picked up the box and shook the doctor’s hand. “Danke, Doctor Braun. It is one less task to tend to before time to go.”

He nodded his head and smiled. Without the sun glaring behind him Mari saw that he was considerably older, perhaps Papa’s age, and his eyes looked surprisingly kind.

“We appreciate your generosity, don’t we, Mari?”

“Ja, takk,” she managed to say, ignoring his extended hand. She pushed in her chair and turned toward the doors.

“It’s nothing, but I hope you’ll find it helpful.” He followed them across the lobby and tipped his hat as they left. “Auf Wiederhesen.”

As soon as they were out of sight of the hotel, Mari demanded, “What were you thinking?”

Her sister’s expression warned her to wait until they reached the relative safety of her apartment.

While Lise did the supper dishes Mari took one last survey of the bedroom, making sure she wasn’t leaving anything behind. It was a struggle to focus on anything after her sister explained the decision to join Dr. Braun. Details were few, but Dr. Braun had gone out of his way to help Lise several times since he arrived at the hospital in the fall. He was one of the few German staff who knew about the deserted office space where Mari studied at the hospital. He had even obtained a visitor’s identification card for her in case someone questioned why she was there. He had proudly shown Lise pictures of his two daughters, close in age to Mari. He missed them terribly. Lise believed he was a genuinely kind man and had observed him treating all patients with equal skill and medications, whether they were Germans or Norwegians or even prisoners from the resistance.

That did little to remove Mari’s objections to being seen with him, to accepting his gifts. She wondered what might be demanded of Lise in return for such generosity.

When they opened the box at her apartment they found two sandwiches with ham, cheese, and real butter along with four small of cakes. Tucked in the side of the box were a dozen or more extra ration tickets for meat and vegetables. They divided the food and Mari insisted that Lise keep the ration tickets. She was on her own in the city now and had no canned garden foods tucked away in a basement cold storage room as Mari did at home.

Lise stepped in the bedroom. “All set? Leif could be here any minute. You don’t plan to sit around and visit, do you?”

Mari moved to the living room and made a half-hearted attempt to look around the tables and shelves for anything of hers. “Not at all. I just want to get this trip over with as soon as possible and get back home.”

Lise followed her and tapped her on the shoulder. When she turned Lise handed her a science lab notebook. Lise exaggerated a scolding expression but slipped into a grin despite herself. “I thought you checked the bedroom? Are you giving up science studies?”

Mari took the workbook and tucked it into her backpack. “I just can’t seem to think straight. How am I going to get through all those hours on the train with Lief?” She took a moment to rearrange the items in her pack to cover the secret lining holding messages and other documents.

“You might change your mind and take the sleeping powders once you are on the train. You still have them, don’t you?”

Mari’s hand slipped into her pocket and she patted a slim envelope. “Yes, but I won’t use that approach unless my nerves get the better of me. I can’t take a chance on being muddy-headed around him. It would be awful to sleep so deeply he could go though my bags.”

She tugged the two overloaded cases to the door then walked to the window. “Where is he? It will be dark soon. I really don’t want to be out on the street with him past curfew.”

Mari felt her sister’s arm around her shoulder and leaned into her. She fought back tears and whispered, “Tusen takk for everything. I’ll miss you so much. When will I see you again?”

“I’ll be going to _(research Erik’s suitable town)__more often now to see Erik, so I won’t get back to Ytre Arna. Perhaps at the holidays again, but only if my schedule permits.”

Lise stepped back and brushed a tear from Mari’s cheek. “You’ll be spending much more time with Doctor Olsen when you return, and you can ask him anything. Even if Mama, Papa, and Bestemor are busy or tired, they want you to tell them when you need help or have questions.”

Lise stepped back further and looked Mari over from head to toe, then gazed directly into her eyes. “You’re just a young girl, Mari, barely a teenager. This invasion and occupation have pushed you into chores and worries and secrets only an adult should have to carry. You may look and feel older than you are, but you are always our little one.”

I share this passage today as a reminder to us all. Every person is an individual, and no matter how justified we may feel in judging their choices and actions, we can never know what is in their heart. We’ve been living through times of suspicion, anger, and fear. perhaps more so than at any other times in our lives (at least for those who are young). Stress and worry makes us miserable. Lise mentions above: Even when it feels impossible, Spring always follows Winter. As I often write when signing books:

May you know the love, laughter and strength of family,