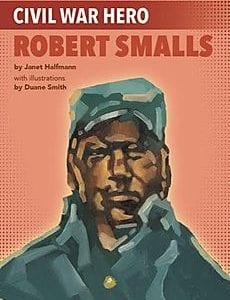 Would you watch a movie about an enslaved man whose intelligence, ambition, skills, and daring choices affected the Civil War? Would you root for a hero who rescued his own and other enslaved families, leading them to freedom in the North? Are you curious about an enslaved man who delivered valuable  weapons into the hands of the Union, right under the noses (and cannons) of guards at a Confederate fort? Would you want to know more about the childhood that shaped him, the heart-stopping events of that night,  and the results of his heroic efforts in his later years?

I’ve noticed social media buzz indicating that there are people with the means to  produce such a movie have heard about Smalls and are considering a feature about this hero, Robert Smalls.

No worries or frustration, though, about having to wait. 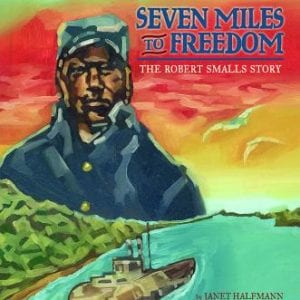 Author Janet Halfmann first wrote about this impressive unsung hero in her picture book, SEVEN MILES TO FREEDOM: The ROBERT SMALLS STORY.  At that time very few in the general public knew his name or accomplishments. Published by Lee & Low in 20o8, and illustrated by Duane Smith, that book was my introduction to Robert Smalls. Halfmann’s dramatic writing swept me along on his remarkable journey to freedom, and back matter revealed the intensity and authenticity of Halfmann’s research that enriched the telling with accuracy and detail. 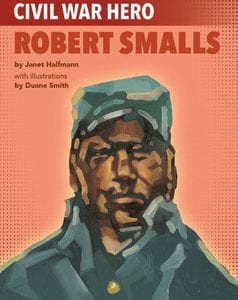 The same publisher and creative team (Halfmann/Smith) have now released a new book about Robert Smalls. This chapter book format provides expanded details in the biographic narrative and extended historic context in each chapter’s supplementary pages. This title is a recent addition to the powerful Lee & Low series “The Story of…” .

I haven’t read other titles in this series, but in this case Halfmann has written both narrative and background segments with equal mastery. The life story of Robert Smalls remains little-known to many and deserves this awe-inspiring spotlight while the related historical references make Small’s accomplishments all the more impressive.

Born enslaved, Smalls grew up within the comparatively “safe” status of a “favored” house servant, viewed fondly by his master/owner. But Robert was observant, noting the vicious abuse of slaves on nearby plantations and recognizing his own vulnerable standing within society. He witnessed the sale of other black people on the auction block in nearby Charleston, appalled by their separation from family and inability to control their own futures. He viewed other humans as they were reduced to pieces of property with no legal rights. Those observations made him yearn for freedom from his earliest age, propelling him to work toward that goal every day in every possible way.

The first chapter reveals this and more about an ambitious and astute young man who seeks a life of dignity and freedom, despite the steep odds against him.  Readers will cheer for his courage and energy and intentions, for his resilience and hard work. Each chapter advances his life story through continuing  challenges that take your breath away and tug at your heart.

Each dramatic narrative in a chapter is followed by a few pages of background and explanatory text, providing related historic facts and context. Those sections appear on gray-tone pages and use expository text patterns, but are equally accessible to readers with engaging language and structure. Each of these parallel chapter sections, the personal narrative and the background material, is strengthened by its relevance to the other.

Some of the recent and historic figures featured in THE STORY OF… series are prominently known, while others, like SMALLS,  are less familiar to the general public. The series targets readers in grades three-to-six, but I, as an adult, found it to be informative and appealing. Well-written and compelling stories of people who lived powerful lives always are.

The structure of this book intersperses dramatic narrative chapters with riveting spot illustrations, followed by a short text section that is purely historic, incorporating archival images and details. The deep research used in both sections is documented in back matter sources, where nonfiction text conventions include a timeline, a section providing related resources (divided by topic), a glossary of terms, and another example of an enslaved person who risked her life to escape to freedom by hiding in a linen chest. The section of recommended related books is also sorted by topics. This will be of special interest to those who are eager to learn more of the hidden history of enslaved Americans who took enormous risks to reach freedom and support others. 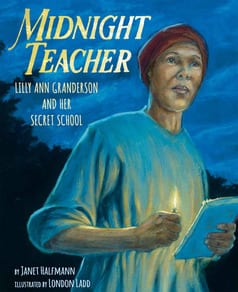 I believe you’ll want to recommend the original picture book and this recent chapter book/biography after reading. That could also lead you to another of Halfmann’s award-winning picture book biographies about a figure from hidden history. MIDNIGHT TEACHER: Lilly Ann Granderson and Her Secret School will inform and astound you. The brave choices of this enslaved woman and her devotion to literacy in the face of threatening laws and oppressive social conventions deserves your attention all year long, but shines especially brightly during March, Women’s History Month.

When you take a closer look at any of these, and I’m counting on you to check them out, I’d love to read your reactions in the comments.

2 Responses to “Hidden History in the Spotlight: The Story of Civil War Hero Robert Smalls”