It’s been fun to hear from folks who enjoyed reading  my prior post of “outtakes” from early efforts at my Norway trilogy. I dug into some of the other “rescued” chapters from various versions and found another to share. The characters from my prior post have undergone multiple rewrites before reaching this stage, and this next passage shows a bit of my growth in learning how to include information within the context of the story rather than as a “pull-back” or “information dump”. It’s still not publication-ready, but I can recognize my own progress as I read back from a several years later. 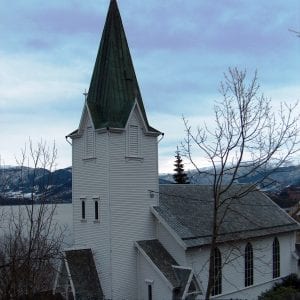 That night Nils hurried back to his family with his good news.

His older sister Lise wouldn’t learn about the upcoming wedding plans until her next visit, and no one could guess when that would be.  She worked as a housekeeper for several German occupation families in Bergen.

Lise’s husband captained a fishing boat that had escaped to England with other ships when the invasion began. She and her family feared for his safety as he supported the resistance in the North Sea, but she had to find a way to support herself and their daughter. It eased her mind only slightly to realize that the occasional tidbits of information she could gather in the German households might help the war effort in some small way.

Anika was safer by far living with her aunt and uncles in Ytre Arna, but she missed her mother and father terribly. Lise’s youngest sister, Kristia, was only seventeen, but together with her brothers they provided love and security for their niece Anika, helping her to weather these dark days without her parents.

When Nils announced the unexpected news of a wedding, the room erupted with enthusiastic congratulations, questions, and hugs. As the chatter subsided, Kristia said, “Anika, it’s past your bedtime, even if it is Saturday. Come along now.”

“Not yet, Tante Kristia…” Anika pleaded.

“Hurry now, and we’ll still have time for a story or two before the lights are turned out,” Kristia said, taking Anika by the hand and leading her down the hall.

Anika squirmed away and ran back to Nils, squeezing him around the waist and pressing her face and braids into his stomach. “Onkel Nils, will there be an almond  wreath cake? Will it have flags?” she asked.

Nils tucked his hand under her chin, tilting her head back to look into her hopeful blue eyes. “We’ll see, little one, we’ll see. We don’t have to decide tonight, do we?”

Before long Anika and the others had settled in for the night. But sleep eluded Nils, who spent several hours asking himself Anika’s questions.

And many, many others.

The next morning, Nils spoke with Sonja again on their way to church. “I’ve been thinking about our wedding plans,” Nils said, smiling.

“You’re not getting cold feet, are you?” she asked with a grin.

“Not at all… in fact, I’ve been hatching a rather daring idea.”

“Tell me, quickly. “ She leaned in closer and whispered, “I hope you’re not thinking of taking off for the mountains again!”

“We’ll talk after services,” he said, as they climbed the gravel road rising through the village center to the white timber church. All Sonja could do was frown and gently jab him in the ribs with her elbow.

Later that day, while they hiked deeper and deeper into the forest on a rugged mountain path above the town, she insisted on an explanation. “How much farther do we need to go, silly? Are we hunting for trolls to attack the Germans? A wedding is not such a secret as you are making it out to be, and I can’t wait another minute!”

Nils smiled, sensing he had stalled long enough. “Your mama gave me the idea yesterday. I checked the calendar last night. We could schedule our wedding day for May 17!  Syttende Mai falls on a Saturday next spring, and we could invite the whole town!”

Sonja’s expression quickly shifted from annoyance to surprise to excitement as Nils continued.

“If the Germans are allowing traditional dress and songs at weddings, we could use our celebration to give our district their Constitution Day!” He had spoken softly, but his eyes were bright and he smiled hopefully at Sonja. “But would you mind sharing your wedding day with our country’s holiday?”

“Of course not,” she laughed. “At least you’d have no excuse for forgetting our anniversary, even when we’re both old and senile! Do you really think it would work? How could we get enough food? Where would we hold the celebration? When would…?”

“Nils put his index finger to her lips and smiled. “Those are just a few of the questions I have, too, but we’ll find the answers to them somehow. I know we can, if we work together. Should we do it?”

“Absolutely!” she responded with a hug. “Let’s go tell my family!”

“You mean your mama, the resistance leader?” he laughed as they turned back toward town.

I hope you’ll enjoy imagining this version. It more closely reflects the facts of the story I heard about involving an  Ytre Arna  “resistance wedding” on my first visit to Norway, many years after the war had ended.

My end-of-year-holiday newsletter will be ready in a week or so and will include a short holiday excerpt that was cut from the final book in the trilogy. If you haven’t already signed up to receive the newsletter, it’s easy to do>>> in that right column, over there. My newsletters aren’t long, so if you care to get updates a couple of times a year, sign up to have it drop into your inbox.