Long ago (REALLY long ago) when I was in college, an instructor asked me who my living role models were. It took me forever to decide, since I was only allowed to respond with three names. My first thought was to name family members, all of whom I loved and admired. But I realized that they were not providing ROLES I emulated.

This was in the sixties, and I had been stoking my activist, independent spirit since kindergarten. It was not a requirement, but I knew I wanted to name a feminist leader, a civil rights leader, and a political leader. So, in the civil rights category I named Martin Luther King, Jr., prior to his assassination. In case you are curious, the other two names were Gloria Steinem and Mahatma Gandhi.

I’ve always avoided naming “favorites” in any category, from foods to books to music to… you name it. This is a great example of why. At the time I wanted to include names of fictional characters from literature, historic figures (even from the recent past, like John F. Kennedy), and individuals whose character and values I admired, even if their “roles” were not ones I would choose. 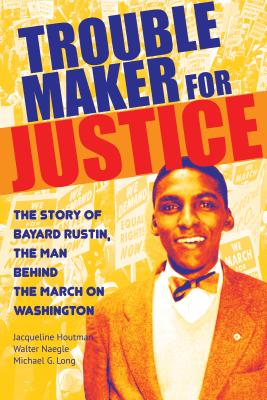 Looking back to that time, I wish I had named Bayard Rustin in that civil rights category. Even though I knew a bit about his pivotal role in the long efforts to achieve equal justice for all, I didn’t know enough about him to name him. I also didn’t know the reasons WHY the details of his leadership and choices at that time were less well known than other leaders.

That’s why I’m excited to cheer for the recently released TROUBLEMAKER FOR JUSTICE: The Story of Bayard Rustin, the Man Behind the March on Washington (City Lights Publishers).This biography was originally produced and distributed by the nonprofit QuakerPress as BAYARD RUSTIN, the Invisible Activist, and bothversions wereco-authored by Jacqueline Houtman, Walter Naegle, and Michael G. Long. I read the original work. In it, I learned so much more about this towering figure in the Civil Rights movement, Bayard Rustin. I enjoyed rereading this important work, which added to  valuable back matter (discussion prompts, timeline, and reference notes) to include an index. It’s all information I wish I had learned when I was younger.

This remarkable man has been the subject of various academic  and adult studies, and Rustin was posthumously awarded the Presidential Medal of Freedom in 2013. Even so, Rustin’s name is rarely mentioned in accounts of those important and dramatic decades in current classroom materials geared to younger learners. This dedicated biography of Rustin for young adult readers is overdue and welcome.

My personal participation in civil rights campaigns and protests was active, but limited by youthful compliance with cautious parents. I was involved enough in youth civil rights organizations that the name Bayard Rustin was familiar to me from strategy discussions, and brochures. In later years I read limited references to him in materials about the historic events of that era.

Rustin played an integral role in the movement and mentored various iconic figures whose names are so much better known than his. When you read this thorough account of his life, you’ll understand why he has slipped between the cracks of history, so to speak. As the authors reveal, his comparative obscurity was the result of intentional efforts by Rustin to remain behind the scenes throughout events receiving public attention.

It’s not that he was stage shy, having used his outstanding gifts for music and song to win college scholarships, to earn spending money, to rally support, lift spirits, and simply entertain. He was an eloquent speaker as well, impressively articulating issues, questions, and persuasive arguments. What’s more, he was a handsome man with confident carriage, a ready laugh, and a welcoming attitude. He was direct and creative, well-liked by nearly all who met him. So why is he not better known?

The answer will surprise many present-day young readers.

Rustin was gay. He was accepting of his preferences and identity, never trying to hide or deny it among his close acquaintances. He was not closeted.

But the mid-twentieth century (and long beyond) was an era of bigotry and persecution, a time when homosexuality was considered degenerate, disgusting, shameful, and even illegal. This was such a prevalent attitude that it was codified in laws that criminalized any evidence of homosexuality.

After considerable reflection, Bayard recognized that his own acceptance and openness were not the issue. He was concerned that by assuming a more prominent role in the many public actions of the Civil Rights Movement he would bring more attention to his sexual orientation and relationships. If so, it could develop a “guilt by association” effect on the movement.

He would sacrifice his direct public role to avoid undermining the success of the movement.

Working as a champion for Justice and Fairness and Peace was Rustin’s lifetime goal, his central identity. He was unwilling to risk any actions that could delay or reduce the momentum of the civil rights movement, even though it meant stepping aside from visible public roles. Instead, he worked tirelessly to advise, organize, and promote the many steps along the way from rights denied to rights claimed and established at great cost. The price he paid personally included arrests and attacks, but it also cost him his rightful status among the leaders. Many of those involved say that the March on Washington could never have occurred or succeeded without Rustin’s energy and expertise at the helm, behind the scenes. This biography make it clear they are correct.

The best part of this biographic profile is the skillful balance Houtman, Naegle, and Long achieve in the writing. They deftly explore rich details of Rustin’s early years and beyond. Raised by his Quaker-educated grandma, Julia, he was inspired to relieve suffering, to resolve injustice, and to speak out rather then stand by in the face of war and wickedness. From childhood and on throughout his life, he was called on to demonstrate, time and again, that his actions would speak louder than words.

His words, though, were eloquent, as original music lyrics, poetry, and leadership manuals confirm. Even then, he agreed to leave his name off of authorship to avoid attacks on the organization by those opposed to him for his personal orientation.

Rustin’s story reads as compellingly as a superhero adventure, including imprisonment, working on a chain gang, interactions with iconic civil rights heroes, and so much more.

I wish that this information had been available to me at the time of that original college-age question. I could have cheered for Rustin even back then, claiming him as a role model worthy of wider attention. In that sense, I celebrate this book beyond its obvious outstanding qualities. I welcome the attention it is receiving, including four starred-reviews to date and praise from Representative John Lewis, the last surviving speaker from the March on Washington. I have no doubt that award season will find this title on the shortlists in many categories. It feels like another step toward justice to see Bayard Rustin now rising to greater awareness among all people, but especially among young readers.

This book, and the research and inquiries it inspires, could well land Rustin’s name on the response lists in the current generation when they are asked, “Who are your role models?”

TROUBLEMAKER FOR JUSTICE: The Story of Bayard Rustin, the Man Behind the March on Washington, by  Jacqueline Houtman, Walter Naegle, and Michael G. Long.