As we reach the second half of the short month of February, I’m belatedly poking my head above ground to apologize for my absence in recent months. Some intense personal demands occupied my full attention since early Fall. I’m overdue on newsletters, blog posts, and reviews. The good news is that there has been some good news during that period which I’ll begin sharing, I have read some outstanding books to review, I have been writing, and my life is coming back under control with prospects for continued improvement in the coming year. Thanks for your patience in waiting for things to reach this stage! 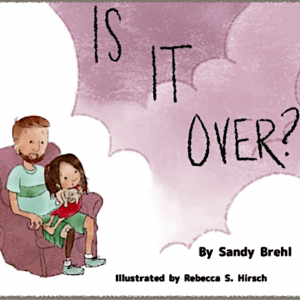 Some sunlight for this stormy story!

The first and most important news to share is that KIRKUS REVIEWS has published a full review of my nearly-abandoned picture book, released in July, 2021. IS IT OVER? is a story of my heart, and one I had hoped would reach many readers. My personal issues, the limits of a pandemic, and other factors meant fewer events, outreach efforts, and school visits. I did share copies of this book with quite a few FISHER HOUSE sites and received some touching letters in response.

By the way, if you know of a Fisher House or other veterans group who might appreciate having a copy to share with their members, please respond below. I welcome a chance to share this book with  those for whom it might be especially meaningful.

The review offered a comprehensive story summary (using more words than the word count of my sparse text!) but especially focused on glowing praise for the illustrations by Rebecca S. Hirsch. I’ve said from my first glimpse of Becki’s art that this could nearly be a wordless book, with her evocative and appealing narrative art knocking this story out of the park and into hearts of readers. Please read the full review below to appreciate the specific examples noted by this reviewer.

“A young girl dislikes a loud storm but uses her imagination to calm herself and her military veteran father in Brehl’s illustrated children’s book.

Risa is playing at the beach when a thunderstorm approaches. She runs to her house and says, “A STORM Daddy! Make it stop!” He tells her that he wishes that he could and that it will be over soon. He reassures her that she’s safe and encourages her to play in her room. As the wind howls and the waves pound, Risa tells her stuffed elephant, Ivan, not to be scared. When there are loud thunderclaps, she runs to Daddy again. Risa feels his heart racing, and he says that when he was young, he loved storms, and “skies were stages for my imagination.” (Hirsch’s upbeat illustrations show clouds playing instruments and riding on a ship and a whale.) But Daddy says his stories won’t help Risa, because they changed when he was a soldier; this is demonstrated by images of menacing animals. When the youngster looks at the skies, she sees golden elephants, including a baby one that looks like Ivan, led by a daddy elephant; Risa declares that the elephant family is safe, and the daddy elephant is shown fending off dangerous creatures. Daddy claims he also sees the golden elephants, and now his heartbeat is steady. Over the course of this book, Brehl presents a story that may help readers whose experiences mirror the characters’—particularly those in military families with members who struggle with PTSD. In the illustrations, Ivan, the stuffed elephant, is delightfully drawn with a heart on his body; his eyes widen with surprise at a loud crash, as if he’s a living creature. Interestingly, Risa’s father is depicted in Hirsch’s work as having a prosthetic leg, which is never directly addressed in the text—an effective narrative choice. Lavender shading is intriguingly used to indicate fear.

An often engaging work that may help to allay fears of readers young and old.”

As my life begins to resume a more predictable pattern, I hope to soon share some book reviews, distribute a spring newsletter to update changes in the past year, and reach out to loyal readers here on a more regular basis. Notice that I said “HOPE”, not “PLAN”. This year has certainly increased my awareness that plans can change and adapting to realities as they unfold is the best possible survival skill one can have. But HOPE? No one will ever make me give up that practice!

Along with that is my deep gratitude, for this lovely review, for the powerful support of a talent illustrator I’m proud to call my friend, and to readers like you who continue to show interest in my goings on!

Back to you soon!