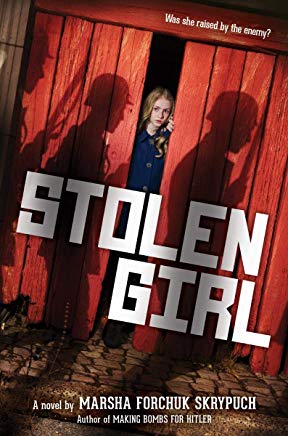 THE STOLEN GIRLis an engaging historical novel, but quite different from others I’ve read about post-WWII survivors. I enjoyed this well-told tale, explored though the eyes, voice, and patchy memory of twelve-year-old Nadia, a refugee from five years in a displaced persons camp in Europe. How she came to be there is the crux of a gradually resolved mystery.

The story begins with her emigration journey to Canada in 1950. This skillfully written story opens with scenes that are viscerally compelling, both revealing and mysterious. On the transport ship, her would-be mother, Marusia, is so seasick she wears a bag around her neck throughout the long voyage. Without supervision, Nadia thinks nothing of climbing the rail to dangle her legs over the deck above the ocean waves, savoring the sensation of freedom. My stomach lurched during both descriptions. The opening pages reveal that her survival demands young Nadia adhere to a claim to be the daughter of a caring couple who are nother parents.

In those first chapters, readers experience Nadia’s confusing journey to Brantford, Canada and follow her through earliest days of settling into the dirt-floor, bare-bones wooden house, built for them by her not-really-father. Nadia’s point of view reveals taut and conflicting emotional adjustments to the house, the foods, the school, and her peers. Her long blond braids and blue eyes trigger bullying and accusations that she is a Nazi, an attack of the worst possible kind.

Reading those early-days chapters, I was struck by the many parallels with modern day refugees. They, too, face countless adjustments to language demands, cultural differences, financial struggles, and comparisons with demonized stereotypes. This is a well-researched story that rings true to historic events but is entirely relevant to current events, even though it was published in 2010.

The story’s focus and tension shift as Nadia’s memory of her earlier life gradually returns in fits, flashbacks, and nightmares. The more she recalls, the more frightening and confused she becomes. In troubling scenes she relives being imprisoned in a room with barred windows, living in a grand home, wanting for nothing, but wanting none of it. Eventually she realizes her “Votter” (father) is none other than Himmel. In another episode, she sees Hitler’s face, inches from her own, as he pinches her cheek and calls her a “perfect example of Aryan youth”. As memories assault her, she is plagued with doubts about who she really is. Is she, WAS she, actually a NAZI!

The author’s note at the end of this book begins with the lines ”I first heard about the Lebensborn…”. I first learned about Lebensborn while researching the German occupation of Norway for my trilogy. Among the many hateful policies planned and implemented by Hitler and the Nazi Party (instituted years before the actual war was initiated), this is policy is less known than most. The drive to create a master race, a society of “perfect Aryans” is marked by the horrors of Genocide: euthanasia, sterilization, death camps, and mass murders. The less-discussed aspect of the campaign was the formal policy of LEBENSBORN.This is described in the author’s note, briefly and in age-appropriate language. One aspect of the comprehensive plan to build a superior society involved identifying children who fit a detailed profile of body metrics (blond hair, blue eyes, nose shape, skull size, no defects, intelligence, etc.). Children who “measured up”, especially girls, were forcibly removed from their families and placed in German homes, raised to be the future mothers of the Fatherland, so to speak. That horrific truth inspired the fictional story presented here.

To create a novel centered on such policies, not to mention details of their implementation, feels like an insurmountable challenge for a middle grade novel. In my own books this topic is referred to indirectly and with limited details. Skrypuch has succeeded in this a remarkable challenge by using twelve-year-old Nadia as the lens through which readers learn yet another truth about what happened during that war. We empathize and explore those truths in ways similar to Nadia’s- a bit at a time, returning again and again to the safety and comfort of a loving family and loyal new friends.

THE STOLEN GIRL offers the usual aspects of great middle-grade books in abundance: character development, relationships, increased agency, rising tension, mood, and story structure. This story has depth and topical issues that elevate it to an even higher level than other novels. It will hold its own in literature circles and thoughtful discussions comparing social issues, historic eras, and other titles that feature war-torn lives in other decades.

I hope you’ll read STOLEN GIRL and share it with others. If you do, I’d love to read what you think about it in comments below.