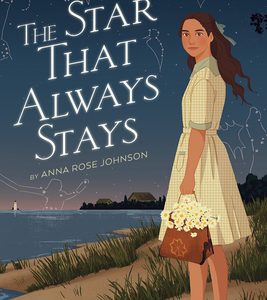 THE STAR THAT ALWAYS STAYS

Young Norvia’s story is one of coming of age in a world that has been turned upside down by her recent family events and looming global war. Her pursuit of a place in the real world is also shaped by longtime social pressures of identity, class, gender restrictions, and social expectations in the early twentieth century. Rising like guiding stars are Norvia’s heroines from the pages of novels: Anne (of Green Gables), Jo (and her sisters in Little Women), Betsy-Tacy, and Pollyanna, among others. references to these are threaded throughout, always through the relevant issues Norvia faces at a given time.
Norvia also treasured the stories of her Native heritage, told by her Ojibwe grandfather, Grandpere. His presence in her early years anchored and inspired her. The stories he shared, and those of fictional young women represented Norvia’s North Star, the star that always stays. But in that era (early twentieth century), with both Native and French bloodlines, her mother discouraged any retelling of those stories or even mentioning their ancestors. The less said the better, leading to a sense of questioning and social shame.

Intermittent chapters bounce between past and present for Norvia, but each is clearly labeled and tagged for location. This will support younger readers in recognizing that the same characters function in different roles and at different ages throughout the story. Norvia, as the central character, travels a complex but compelling journey through those times, with emotions and reactions suited to the shifting times and views. She arrives at the conclusion of the novel in a credible space and stage of life that offer both satisfaction and optimism.

Each of the other family members is distinctive and well-developed, from her younger siblings Casper (the youngest brother) and Dicta (an unforgettable younger sister who is pricelessly opinionated and self-directed), to her older brothers (mostly out of the home but significant in her life). Her mother,  new step-father, Grandpere, and even her ancestors emerge as engaging and evolving over time. Her same-age step-brother is portrayed as a narrow “type” at first encounter. Time and effort allow both Norvia and readers to expand their view of him and his struggles, including empathetic awareness and recognition of  gradual changes in his view of the intrusions on his life. I admired the ways in which such emotional truth throughout the cast enriched the story. Norvia’s school relationships explored friendships with a wide range of realities that echo school kids today, especially those who are “new kids”, and even more so when they are “othered.”

A brief peek at the story line will avoid spoilers but is worth a quick look and a full read of the novel: Set in northern Great Lakes area, the scenes toggle between rural/island memories and the comparatively “urban” Boyne City, Michigan.  Norvia’s mother had been unhappy with her Swedish immigrant father for many reasons. He is portrayed as both a goodhearted and flawed/biased husband/father, one who Norvia’s mother eventually divorced. That  occurs very early in the story, followed by Norvia’s mother announcing she has fallen in love with a well-to-do widower. This sets the stage for family protests and powerlessness to prevent the marriage and new family configuration. Among many fears and adjustments, Norvia is allowed to attend Boyne City High school as a freshman, her longtime dream at a time when few attended high school, especially girls. With the arc of a passing school year, she and her family and friends mark progress and setbacks against a framework of academics, holidays, and school and home social events. Tension throughout this period increases with escalation of World War I, family twists and turns, and bullying at school.

Despite unfolding more than a hundred years ago, issues of identity, trust, misunderstanding, dealing with divorce, sibling separation and stress, school bullying, crushes and friendships, and step-family relationships will resonate deeply with current audiences. The fact that this fictional family account is firmly rooted in Johnson’s actual family history amplifies the impact even more. Also, the character Norvia’s traditional stories and family history heritage are woven into her memories and present pressures in artful ways. Occasional Anishinaabemowin (Ojibwe language) words are used, with in-text references or context providing clear understanding. French words are also used at times, and a brief glossary for both sets of vocabulary are in back matter. A helopful star and constellation list/translation  is listed because the vast night sky plays such a vivid role in this novel, becoming nearly a character in its own right. A brief author note indicates that an actual child, Norvia, her birth on Beaver Island, her mother’s divorce and remarriage were all verifiable elements of the author’s family history. These discoveries led the author to genealogy searches and other research to make this novel as authentic to their lives and memories as possible while being accessible and entertaining for modern youth. The note concludes that this research and writing process was a joy for the author. I’ll add that her work produced a novel that was a joy to read. There are far too few novels for this audience (or for any audiences) that provide authentic Native perspectives and experiences. This is a valuable addition to late elementary and middle grade libraries and classrooms. This is a Junior Library Guild Selection and I join in recommending it highly