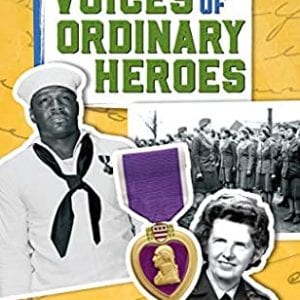 HISTORY SPEAKS is the tagline for this second book of new titles offered by Rockridge Press. Each presents well-researched and compelling profiles of twenty individuals during the Second World War, written with a compelling voice and pace. Each individual is described with riveting writing and content, and their wartime choices demand attention and admiration from the intended audience. Each of the twenty short profiles includes fascinating sidebar tidbits related to the person or other aspect of the chapter, informatively captioned archival photographs, and features a brief quotation by the historic individual.

In the first book, the heroes showcased were all young people, school age standouts who met the challenges of war with courage. In this volume, the focus shifts to adults. Ordinary adults, as the title claims, but ones whose actions and decisions put them at risk in a quest to save others, respond to duty, or resist the course of war. As is true for the first volume, some names might be familiar (Josephine Baker, Oskar Schindler), but most will be a revelation to readers young and old.

Both books provide several brief but effective chapters establishing an overview of World War II for the sake of its intended young learners. In clarifying who, where, how, and why this conflict engaged, along with a summary of its resolution, essential vocabulary is given meaning in context (with text indicators) and key words can be checked in the glossary. This cogent introduction, along with a double page map, allows early readers to anchor each heroic life within the global span of war.

Some heroic acts, like those of U. S. Naval hero Dorie Miller, outshine the most dramatic of Hollywood action movies. Some have been lauded in their homelands while Americans remain unaware of their accomplishments. One example of that is Nadia Popova and the so-called Night Witches, a group of women pilots in USSR whose executed multiple nightly flights in tiny biplanes to drop bombs over Nazi positions, helping to defeat the German invaders.

Some accomplishments involved preserving history, as Vilma Grunwald did just before her death in the gas chambers at Auschwitz, and artist Charlotte Salomon, who produced autobiographical paintings from 1940-43, numbered and notated, before her execution in the same camp. They created a legacy that remains a powerful documentation of Nazi atrocities. Duty was the driving force behind many of the stories, including the delivery of backlogged mail to American fighting troops, or decades-long resistance to surrender by Japanese soldiers on Pacific islands.

Each brief profile with its supporting materials feels like a short visit with very human heroes. Some have received well-earned recognition for their fighting, spying, rescues, or other resistance efforts. The stories of some others have only recently surfaced to gain the attention they deserve. Now, thanks to this impressively accessible and appealing set of books, new generations will meet them on the page. Pursuing further information or answers to specific questions is facilitated with an extensive index and resources in back matter.

As someone who has researched, read extensively, and taught the subject of World War II, I appreciated the nuance and variety in the selection of subjects for these profiles. The decisions as to who should land in the spotlight has mindfully provided readers with examples of males and females, with multiple ethnic and racial identities, drawn from positions in entertainment, civilian, and military backgrounds. Many defied the expectations and barriers of society in those days. Some heroism arose from official roles while others were launched by circumstances or personal motivations. In all cases, the courage and consequences of their actions call out to us across time to commend their strength and resilience.