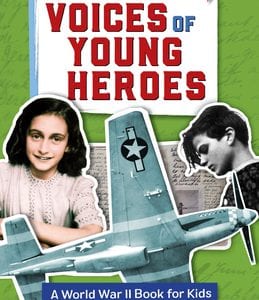 With a tagline of “HISTORY SPEAKS”, this new book does just that, with guaranteed appeal for young readers. It features deeply researched but briefly told stories of twenty “kids” who were heroes during World War II. Their stories are presented in digestible short chapters and are written in the confident and appealing style that has made Halls a guru of nonfiction content for middle graders.

Author Halls provides a brief summary of essential World War II facts in the introduction and three opening chapters, which allows even new-to-the-subject readers to anchor the individual profiles within the complexity of a global struggle for freedom and against genocide and tyranny. Even those with deeper background knowledge will appreciate these early notes and a double-page map featuring key details about the war years and death tolls for the countries involved. They provide American readers of any age with an appreciation of the individual stories and the implications about sacrifices made by others outside our more familiar American hero stories.

The nature of the challenges and heroism demonstrated by the featured youth varies widely, spans the globe, and ranges from individuals with world-renown (Anne Frank) to others whose experiences are obscure but no less impressive. The ages of young people portrayed varies from four years old (the youngest survivor of Auschwitz, Michael Bornstein), through early teens (Anne Frank, and Len Chester, a fourteen year old “bugle boy” who served heroically in battles), through late teens and young adults (Stefani “Stefi” Podgorska, who hid thirteen Jewish friends from the Nazis for eight months) and many others. Some stories involved lying about their young ages in order to enlist in service, or to obtain needed identity papers. Some wrote and distributed anti-Nazi leaflets or destroyed propaganda posters and signs or even poisoned troops. Some died in concentration camps or by execution, others survived through most unlikely circumstances (Sergey Aleshkov, who was “adopted” by a Russian Marshal, one of many abandoned and desperate “wolf children” orphaned during the fierce fighting.) Some stories even describe mystery identities only recently revealed.

This barely scratches the surface of the intriguing details revealed throughout the profiles. Each brief biographic portrait includes archival photos of the individual, direct quotations (those “voices”), images of artifacts and scenes related to the story, and each is followed by a “Did you know” boxed insert that relates to some element of that chapter.

I’ve been looking forward to the release of this collection of short profiles for several reasons. Author Halls has countless ardent fans among school age readers, based on her ability to research and reveal content that hits the sweet spot for even the most resistant or reluctant kids. In large part this reflects her own insatiable curiosity, which shines through on the page. I had no doubt she would apply that compelling touch to the research and writing of these profiles, and I was not disappointed.

World War II is a perennial favorite topic, in part because it is often viewed as a battle between GOOD and EVIL. The nuances within each story encourage kids to reflect more deeply on what makes someone a “Hero”, exploring the fear and fierce desperation that may be the driver behind actions in wartime. It indirectly suggests questions end encourages discussion about rigid definitions of right and wrong, as in lying to protect a life, or facing the need to risk your own life or to take a life.

Some of the featured individuals have been the subjects of other books, and the back matter is extensive and accessible. Titles suggested range from complex to verse novel to picture books. A bibliography of articles and links allow curious young readers (and teachers and parents) to launch more extensive investigations. A glossary is helpful, as is the use of bold/color signals for key vocabulary within the chapters. One glance at the useful index will reveal the historical depth behind this work, even though it reads like compelling drama.